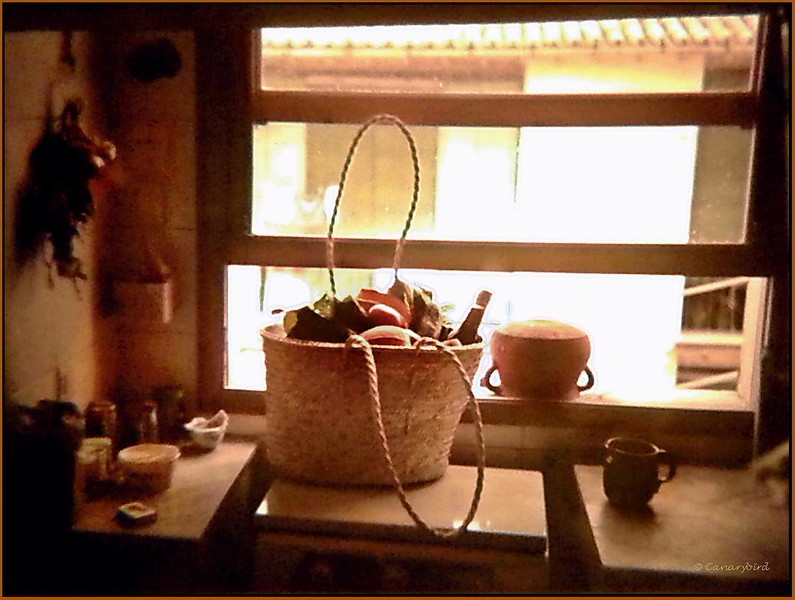 Back from Santa Catalina Market in Palma

In the late 1960s I was staying in Palma de Mallorca at the apartment of Mr. G and his daughter Helen (not her real name) until I could establish myself in my new job teaching music and find my own accommodation. Helen and I shopped weekly at the Santa Catalina market where we bought the vegetable and meat supplies for the next days. All was carried in one or two mesh shopping bags or my big straw basket which we took with us.

I was happy to find this above photo, taken as a slide with my old film camera. It shows part of the apartment's tiny kitchen. Here is another one: The water heater was suspended from the ceiling, the double sink was low and small and there was little counter space. What you see in both photos is the total work space for preparing meals.

Downtown we would walk along the Paseo del Borne and around to the Via Roma, which I believe has since been renamed. This was the avenue of the flower sellers where the central paved boulevard housed the many stalls where flowers were sold. When one wanted to buy a bouquet for a special occasion or just a few flowers for the house, the Via Roma was the place to go. On our Sunday outings in the Citroen deux chevaux we would often drive to the picturesque terraced slopes of Banyalbufar on Mallorca's west coast: As Helen was engaged to be married to her Spanish novio, her fiancé José, she was preparing her trousseau as was customary with young women then. She was concerned that her future mother-in-law might feel that since her son was going to marry an estranjera (a foreigner) rather than a Spanish girl, she might not have the premarriage custom of hand embroidering their linen, such as bed sheets and pillow cases with the initials of the couple.

Since young women then spent hours sewing linens in preparation for a future marriage, Helen wanted to make sure that she did her part by embroidering and adding lace edging to sheets and pillowcases. I remember being so amazed at this detail that I asked Helen's permission to lay out some of her work for a photograph, which now unfortunately seems to have deteriorated more than some of the other photos. Two big events were coming up. The petición de mano, or the asking of the hand by the novio José, and the trip to Barcelona, where I was to go with Helen as her chaperone, or carabina.

The asking of the hand is often the first time that the future in-laws meet. The occasion is a friendly reunion of the two families, where in fact the future husband does not actually have to make a formal request to the bride's father for her hand. Rather they meet for a luncheon or afternoon tea, the engaged couple exchanges gifts, usually the engagement ring for her and a watch, cufflinks or other sentimental piece of jewellery for him. Photos are taken and some wedding plans may at that time be discussed. The groom's parents would be travelling to Palma for this event.

And the trip to Barcelona was going to be an exciting time. Helen and I would go by overnight boat to Barcelona where we would meet again with his family to finalize wedding plans, see the city and stay in a hotel, all the time while I was to chaperone the engaged couple! That was a trip to which I was looking forward with excitement.

Continue on to Chapter 32 The Bride's Hand
Go back to Chapter 30 Dina Moore Bowden
Posted by Canarybird at 12:19 AM

What gorgeous pictures! And what a TINY kitchen! Goodness, how did you ever cook in it?

I sometimes wonder myself how we managed there! The straw basket is resting on the lid of the stove, which lifts up, so when the stove is in use, there is even less space.
Thanks for dropping by!
Sharon

Seriously gorgeous images and vistas, particularly the terraced slopes of Banyalbufar (not easy to spell, but, oh, so easy on the eyes).

Gracias Sol...y tu tambien.
Yes Banyalbufar impressed me very much ever since I first saw those terraced hillsides. I'm so glad I have found these old slides that I took in those early days on Mallorca.
It's a very romantic and beautiful island, especially when you get away from the touristic areas and see the countryside. Thanks for dropping by!
Sharon.