Memories of Mallorca ~ The Arrival

As I stepped off the plane in Palma de Mallorca the sun was blinding and the air was hot . My tired eyes had never seen such intense sunlight and although I'd had no sleep for well over twenty-four hours my excitement at not only being on an airplane for the first time but also arriving in Europe kept me in a state of nervous anticipation.

The year was 1968 and Spain was a sleepy old country which seemed to have forgotten it was in the twentieth century. General Francisco Franco was the head of state and mass tourism into the country had only recently begun. A liter of wine could be bought for just two pesetas, which was then the national currency, and a long baguette or barra of bread cost only a few centimos which were small thin coins made of aluminum.

I had come to Mallorca at the invitation of Canadian friends whose relatives had been established there since before the Spanish civil war. Needing a change in my life at that moment, I had accepted an offer to leave Vancouver and teach classical guitar at a music centre in Palma. It seemed to be an intervention of destiny that the position was open just at a time when I had been dreaming of being able to study with a Spanish maestro of classical guitar, but never could I have imagined that this might have become a reality. 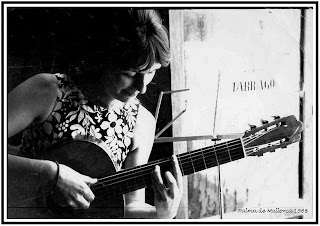 photo from the Mallorca Daily Bulletin
Coming out into the arrival hall of the airport I clutched my one little suitcase. It was made of pink striped plastic and must have been a bargain basement purchase. It contained several cotton dresses that I'd sewn before leaving Vancouver. I'd heard that it was very hot in Spain and that cotton was the best material to wear. One dress was yellow, sleeveless and went with a yellow plastic bracelet I bought to match, and the other was a black and white printed cotton, which I made using the same pattern as the yellow one. I bought a white plastic bracelet to go with that one. I didn't have much money at all and had sold most everything I owned, even my beautiful Spanish-made guitar, to pay for my plane ticket.

Coming toward me was my good friend and guitar mentor, Mr. G. who had invited me to stay with his family. He owned a little guitar factory in Palma and had a daughter who was about to marry a Spanish man. Although she was only a couple of years younger, I was to be her chaperone over the next weeks until her wedding. It was frowned on for her to be alone with her fiancee in those days, and I was to accompany her on a trip to Barcelona to make wedding arrangements with his parents.

Mr. G. greeted me like the old friend he was and after asking me how I had enjoyed the trip he took my suitcase and guided me out of the arrivals hall once again into that bright sunlight that tingled the skin on my arms and reminded me that I was going to be experiencing many other new sensations in the next weeks.

We piled into Mr. G's car, which was a Citroën deux chevaux, a vehicle with just two horsepower and a gearshift on the dashboard which had to be pushed in and pulled out in order to change gears. The car looked as though it were made of tin, the engine whirred like a lawnmower and the soft suspension gave one the feeling of riding in a large baby pram. And so we rocked and bounced our way out of the airport and down the highway on our way to Palma city. 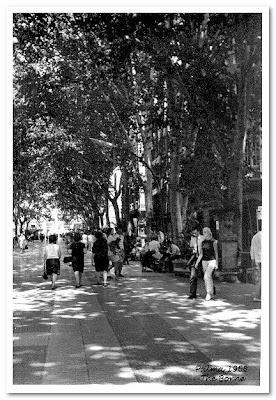 Continue on to Chapter 2.......Palma de Mallorca
Posted by Canarybird at 2:17 PM

Great blog, photos and articles. Thank you for sharing and keep up the great work. Rick

Lovely place. Thanks for sharing your photos, videos and comments.
DimLamp