As we drove towards Palma I was thrilled to see the long row of palm trees on the left side bordering the Paseo Maritimo..."...palm trees....I didn't know they grew in Spain" I shouted as I half rose up from my seat to gaze out the car window. Mr. G. was amused at how little I knew about my destination. These were days before colour television or internet. Photo-filled travel brochures were not so prevalent in bookstores and there wasn't much current reading matter to be found about Mallorca in the Vancouver Public Library.

Then I saw the magnificent Mediterranean sea... a water of such an intense deep aquamarine colour it seemed to be part of a painting. I was becoming dizzy with these strong new impressions. But my eyes were eager to take in more of this strange landscape, this bright and unfamiliar world. Soon the majestic cathedral of Palma was visible on my right followed by the Palace of the Almudaina, both of Moorish origins and both standing as regal guardians over the entrance to the harbour and city. They appeared to be constructed not of gray stone but rather of a warm, golden material which reflected the splendor of the Mediterranean sun and the softening effects of age.

Soon we were parking the car and on our way to have lunch with Helen, the daughter of Mr. G. who was waiting for us in a little restaurant in the heart of old Palma. The Viking or El Vikingo was formerly a stable owned by a Mallorcan nobleman, after which it was a small dining establishment owned by a German man. Just off the main Plaza de la Reina and a few steps up the Calle de Los Apuntadores, the Viking was reached by carefully maneuvering down a couple of steep stairs into a cool darkness of what seemed to be a small cave, filled with delicious scents of dinners and fragrant pots stewing somewhere in an unseen kitchen.

The owner and chef was Anne Oates, a jovial British woman who was both gracious and clever. She had managed to take over this establishment without experience as a chef and turn it into one of the most loved bar-restaurants and meeting places of the local English-speaking community. People lined up at the bar waiting their turn to sit at a table to sample one of Annie's curries or her famous cold salad and roast beef. Her dishes were so popular that after much prompting by her fans, she wrote a little book, filled with her recipes and stories of how she came to be the owner of The Viking.

Mr. G. and I stepped down into the tiny room where his daughter Helen was waiting to greet us. 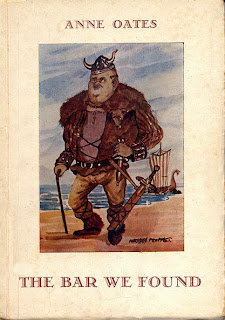 Continue on to Chapter 3......The Viking